For some reason, when I touch the eye icon which would open your files, for some reason, I can't get pass the dropbox part. Saying that I have to make a dropbox account. I don't know what's going on here! Can anyone help me? Please? It's an issue on both my tablet and phone.

Do you have the dropbox app installed? This is now the second report I've heard about this (unless you also reported it on Google Play)-- DubScript uses the standard Android method for choosing files called the "Storage Access Framework", which asks all the applications that are able to provide files-- Google Drive, for example-- to "announce themselves" to the file chooser so that it knows all the possible places your file might be-- you can access script files directly from your local device's external storage/SD or via cloud apps (like Google Drive) or network apps (like email). So all those apps should say that they potentially have a script file. Perhaps what is happening here is that the DropBox app is installed but not configured yet, so it interferes with the process, "demanding" that you sign up. I don't use dropbox at all, but if this is the case, it is completely inappropriate behavior (and I'd write to DropBox to complain). I'd also suggest one of three possible solutions: 1. Sign up for a DropBox account. If you don't use dropbox though, you may not want to do this. 2. Uninstall the DropBox app entirely until such a time as you want to use it. 3. If the dropbox app cannot be uninstalled (perhaps due to it being spamware from your mobile provider), you can try disabling it by going to Settings->Apps then under the "Downloaded" section, choose the Dropbox app and select "Disable" (or "Uninstall" if it's an option). Please let me know if one of these options works so that I can be sure to mark this as a solution. DropBox is in NO WAY needed to use DubScript. I have never used DropBox and it works fine without it. Thanks,
R Update: I installed the DropBox app but did not create an account to simulate your situation. When I press the "eye" button to load the file, I get the regular list of files without the issue you are describing. One other suggestion that might be obvious, but just in case-- to switch between file sources (Drive, Dropbox, external local storage, etc.) you swipe from the left or press the "Hamburger" button on the top left so that the "Open from" is revealed. It looks like this: Now that I have added the dropbox app, I see a Dropbox icon in the list above. You can choose from the various sources. Perhaps you are somehow "stuck" on Dropbox and just need to choose the right source of the files? Please let me know! Thanks.

Alright, so I made an account, but I don't see any files. I don't know what you mean by the "hamburger" button. So I literally have no idea what to do. I tried this on my phone so it looks like I can't open my files any longer for my phone. The only way I could open the files though my phone is through the My Files app or something. I did the same thing on my tablet and it won't work, as the scripts won't load. So I'm out of ideas here.

The "hamburger" button is the

The "hamburger" button is the button on the top left that is three stacked horizontal lines- see a picture here. A few more questions--

1. Did you try deleting/removing/disabling the DropBox app?

2. Which version of Android do you have (See Settings->About this phone)

3. Where are your files located that you're trying to access? If you used My Files to get the file on the phone, is it the same file on the phone your'e trying to get from the Tablet? Or are you talking about a different file? FWIW it should be in the "external storage" -- ie, the place where it says it will save when you create a new file. For many people that will be something like /sdcard/ or /external/sdcard.

4.Can you include a screenshot of the screen that comes up when you press the "eye" button? You can send it to imgur.com and then include the link? (Careful to remove any personal information there...) I'm not sure what you're seeing exactly... A video could work as well...

Thanks for helping to figure this out...
R

1. I tried deleting/removing/disabling the dropbox app. I can't delete but when I disabled the app, whenever I tried to touch the eye icon, nothing happens.

3. I'm not sure about this one. Last time it looked sort of like Drive. So I don't know. Same goes with my tablet. But because of the dropbox issue, I'm forced to use My Files to open the files on my phone and it doesn't work on my tablet.

4. Here's the screenshot from my tablet. It's too late for my phone as I tried deactivating it but again, pressing the eye button doesn't do anything.
http://imgur.com/J7zKeSb

And here's the video showing the issue.
https://www.youtube.com/watch?v=BqJmUmKTIgg

I literally don't know for sure what's going on.

Thanks! That's very helpful, especially the video where I can see that DropBox is fully "taking over" the normal file picker request (or as it's known in Android parlance, the "intent" called "ACTION_GET_CONTENT"). I haven't seen this behavior before on any device, so it's strange that it's happening on BOTH of yours.

A couple thoughts come to mind. These aren't in any particular order, but I have some ideas for things that might work--

1. So this page here tells you how to clear the "default app settings" in Android. I don't know how dropbox has been made the default app for choosing files, but maybe it's possible to clear this so that normal Android file picker will work.

2. I think that phone in the video is a Galaxy S5 (?). Here are some instructions on removing the DropBox app fwiw... (If you root the phone, you probably could remove DropBox, but that may be too much work...)

3. There is a vaguely similar error with Samsung devices I found here. Unfortunately the suggested fix (using */* as a mime type) would break all other devices and show EVERY file available, rather than just the supported ones. But this might be a place to start investigating a solution.

4. Another way to load a script file in DubScript, besides the "eye" button, is to actually start from a different app such as Gmail, Drive, or one I'm suggeting to give a shot as a workaround for now: Astro File Manager. Basically this program will let you navigate through your device, find the file, and then open into DubScript. Would this work as a temporary solution?

5. Finally-- just to be clear as I research this to see if anyone else is having the issue-- could you list:

Thanks again! I think the Astro file manager should hopefully work to get you back on your feet while the issue is being investigated...

Update: Here is what it *should* look like. I have added several Google accounts (that have Drive repositories) as well as the (unconfigured) DropBox account, and the Astro File Manager referenced above. They should all be options. This is Lollipop 5.1.1 (CyanogenMod) on the Galaxy Note 4: 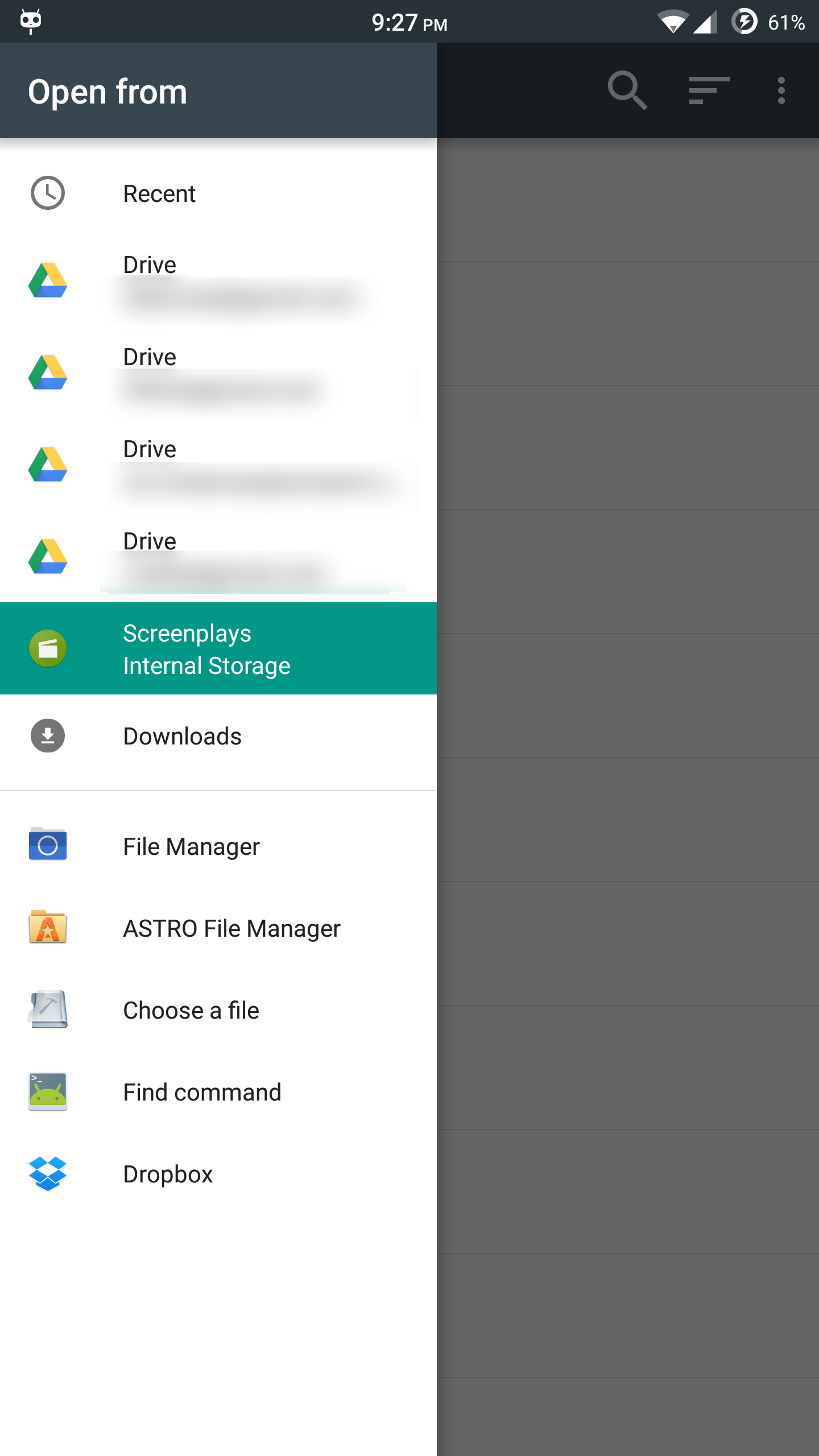 It's starting to work again. Using Astro File Manager! Thank you! I could now open my files once more! Now let me see if it would also work on my phone..........

Great! Do let me know about the phone as well...

The phone is working!

The phone is working too! Thank you!

Woo! Glad to hear it! I'll be interested to hear from anyone else who may have the same issue, or if this was a weird one-time thing (?)

Glad we could resolve it!

I am having the same issue on Android 4.4.2, Samsung Galaxy Tab 4. Clicking the Eye icon opened the Dropbox sign-in page; deactivating Dropbox made that icon now do nothing. Any ideas on what might be causing this?

I have not tried any of the suggested work-arounds. I'm new to the app so I'm just starting to play with it.

Hey thanks for writing in.

Hey thanks for writing in. So you also have a Samsung... the work around is to install the Astro File Manager linked to above. You were able to fully deactivate DropBox? This seems like a major bug with Samsung's version of Android (TouchWiz, I presume?) Out of curiosity, which carrier do you use? I'd like to determine if this is Samsung or the carrier... (I'm hoping to compensate for the bug if I can somehow filter for affected systems...)

(also- just to collect more info-- are you running any modifications to your system-- the Xposed module system for example... or is it stock?)

Thanks for helping to narrow this down!

Update: this page seems to say that Samsung plain left out a standard part of Kitkat, namely the Media Document Provider, which if true may account for the problem. If this is the case, I've whipped up a POSSIBLE solution that doesn't seem to break standard Android on the devices I've tested with so far. So this weekend maybe I can post it as an "alpha" for anyone who wants to try it.

To sign up for the alpha test program, first join the dubscript-alpha google group, then visit here. You can leave the alpha test program at any point, but this is one way I can get test versions out quickly and you can let me know back here on the thread if it works for you. Please be aware that the test version may be more unstable than usual (obviously)... so make sure you have back ups of anything you're working on, which is generally a good practice anyway :)

My tablet is wi-fi only so

My tablet is wi-fi only so there is no carrier. And no system or kernel modifications. It's pretty much fresh out of the box.

Okay, thanks-- hopefully the

Okay, thanks-- hopefully the workaround is okay for now. I was hoping to shoot out an alpha this weekend, but Google just released some new brand-new tools and other neat stuff with their "M" release last Thursday and Friday, so I'm trying to incorporate that and we'll test everything at once. It'll be out soon, just getting everything ready. Exciting stuff!

I just posted a candidate for version b47 on the alpha channel. If you've got the issue, please sign up for the alpha and let me know if it fixes it and/or breaks anything else :)

To join the alpha:

Sign up for the google group relating to the alpha here.
then say you want to get the alpha by clicking here.

If this version works for everyone, I'll put it up for the general public. Otherwise it's back to the drawing board on that Samsung problem...